Buy Nothing day is a day where people are asked to question their habits of consumption, to ask whether shopping should be seen as a leisure activity and to think about the impact of consumerism on the planet and our culture.

It was then with surprise that whilst on our way to a Space Hijackers action, a group of agents spotted a Transport for London team blanking all of the adverts on the District Line. At first we could not belive our eyes, could this really be an official government sponsored team, taking part in a day of action against consumerism?

Sitting on the east bound District line we were initially shocked when just as the train pulled out of the station, the highly trained team leapt out of their seats and popped open all of the advertising holders in the train. They quickly flipped the adverts around and popped them straight back in their holders with the blank reverse side pointing out. Next they deftly popped up a number of the following stickers explaining the reason for their actions:


With the skill of a well trained unit they quickly flipped back all of the holders and the train was returned to normal, albeit minus all of the advertising. The whole maneuver took less than the time it had taken the train to travel one stop. 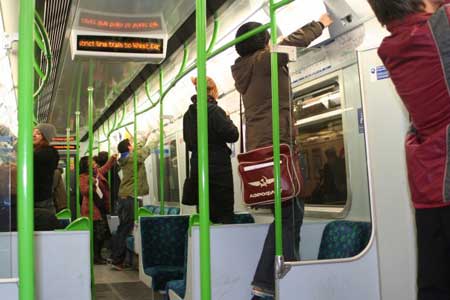 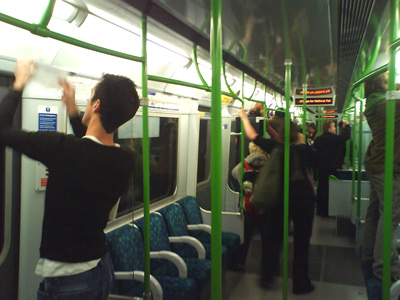 The team in action

A concerned passenger turned to one of the advertising team, and asked "But what are we going to read?"
The advert flipper quickly responded "Well, you could try talking to each other?" 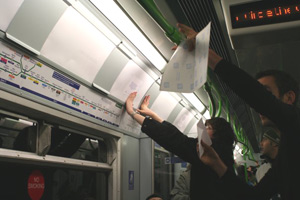 Other passengers even questioned whether the team were actually from Transport For London at all, and as we have admitted we were a bit sceptical at first. One elderly gentleman turned to the team and said "Very good, if only this were for real, eh?".

The Space Hijackers can only commend this action by our transport network, indeed we actively encourage people to talk to each other on the trains, read books, read newspapers or even relax. It is great to think that there is now going to be one place in London where we are free from the constant encroachment and invasion of advertising. The removal of the adverts seems to have definitely stirred up some hot debate on a number of internet forums about the necessity of the advertising, and the balance of advert revenue against passenger experience. A debate which unlike the official tube survey on advertising (which is done in partnership with advertising giant viacom) seems to be much more balanced and not churning out a blank support for viacom. 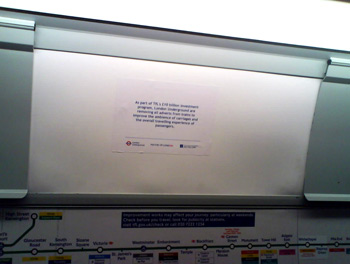 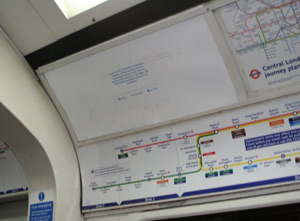 Stickers we spotted on the District and Circle lines.

We were happy to note that several days later the blank advert slots were still making their way around our transport system as they were spotted by various hijacker agents on their way into work, a definite improvement to our daily commute.