The Reaction, What Reaction?

The signs were left up for just over a week before Tower 42 removed them.
In that time several hundred people would have seen them.
Someone incharge would have been made aware and asked for them to be removed.

However the email address has not been contacted by anyone, at all.

What does this mean?
We have a few theories:

1 - The battered into submission theory.

We can only assume that the people working at Tower 42 recieve abusive heirarchical notices all the time, as a regular part of their working life. These people also have absolutely no fight left in them. For people to accept such a notice at face value, and not see that it is either a provocation, or even above the general type of language on notices, shows a great deal about the working world that they inhabit.
We can only feel sorry for them, that they live and work in a world where heirarchical actions like this one are commonplace. Where workers would rather blindly accept such insult rather than causing a commotion and standing out from the crowd.

2 - The self submission, loyalty to the cause theory.

Perhaps the smokers at Tower 42 who read the notice and decided not to complain, actually agree with the statements in the notice. These people place themselves, and their lives at work as something that is less important than a small part of company image. Perhaps they read the notice and conceded that they were in the wrong, and perhaps these people have now decided to smoke at the back of the building rather than the front.

The people who work at Tower 42, the security, managers, cleaners, executives, and even the tea makers are all illiterate, and can't read the notices, even if they could they wouldn't know what to do with them. They have trouble enough deciding what to wear in the mornings and that is why they all turn up in uniform bland dark suits with the obligatory wacky ties. They don't ever look at where they work and notice the new signs with bright coloured tape, as they are just relieved to have made it back to the same building as yesterday. The only reason thay are smoking out the front at all is that somebody else did, and so they trot along as they think it must be part of the job.
Perhaps nobody runs the building at all, there is no management, and our fictional email address is the closest thing, so everyone just believes it.
Unfortunately these same people are responsible for corporate mergers and large scale deals, they take a role in global finance and are stock market players.
The more we think about this one the more likely it becomes. 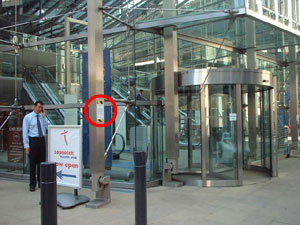