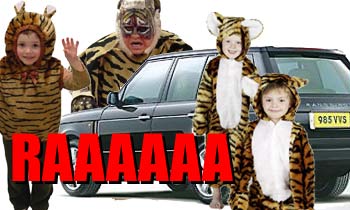 London is a remarkably un-mountainous area, with the area around the Kings road remarkably flat in comparison to other slightly more hilly areas of the city. However it seems that the residents of Kensington & Chelsea have had something funny put in their water, where we see designer shops and residents parking areas, they see jungle terrain and mountains. This can be the only explanation for the ridiculous number of expensive 4x4 vehicles driving around in the area.

We decided that the only way of shocking them out of their petrol guzzling, pollution pumping, lethal weapons on wheels, was to show them what a real safari looks like. The final piece in the puzzle came when Agent Claire pointed out another peculiarity of the local residents, that when excited they say "Raaaa" in a very loud and plummy voice.

Our first step was to scour the charity shops in order to gather as much leopard and tiger print clothing as we could. Meeting a week before our safari we spent the afternoon sewing ears onto hair-bands, cutting out leopard print vests and battling sewing machines. 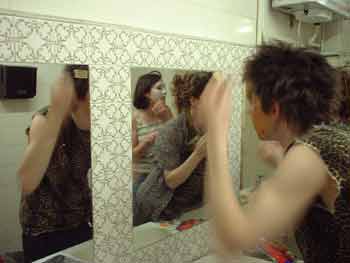 Then on Saturday afternoon we met at Space Hijackers HQ to dress up and put the finishing touches to our outfits. Agent Aaron had brought a selection of children’ face paints and our pride of leopards began to take shape. Agent Mos donned his pith helmet to become our game keeper and we were almost ready to leave. 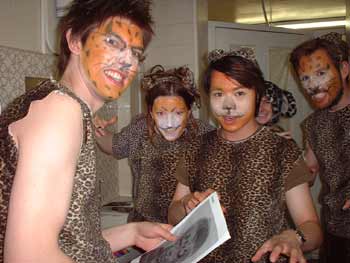 We had prepared a pile of leaflets from the Kensington & Chelsea Safari Commission, warning explorers of a dangerous pack of big cats that had recently entered the reserve, whilst also questioning their choice of London vehicle.

The plan was to hunt down 4x4 vehicles in the area and either eat the drivers, or slip leaflets into their windscreen wipers. However first we had to get to the Safari reserve and meet up with another three leopards in Victoria. This involved a tube journey across London in full big cat costume! 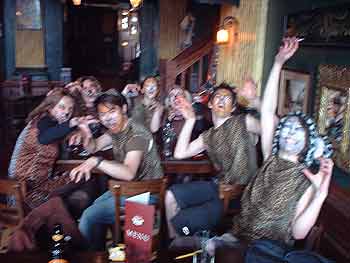 Arriving in Victoria our pride of cats grew to eight and a game keeper, however before we began our hunt, a little Dutch courage was in order. Snarling along the street we bagged a couple of parked Range Rovers on the way to the pub. Then after a quick pint and a bus journey we arrived at designer shopping central. Agent Claire was waiting in Sloane Square for us dressed as a luminous pink tiger with a green lion under her arm. RAAAAA! 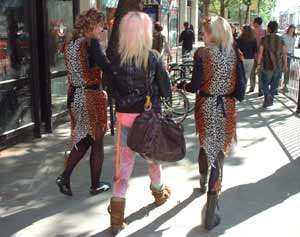 Heading down the Kings rd, our pack was kept busy roaring at Saturday shoppers and jumping on 4x4 vehicles. I know that there are stereo-types of posh Chelsea drivers and Sloane Rangers driving around in top of the range off road vehicles, but this was ridiculous. Almost every third car on the road was a 4x4 or SUV, it was a petrol company executives wet dream. 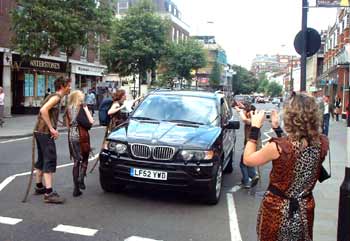 Within the space of an hour we had already dispensed of around 50 leaflets, that is almost 1 vehicle stopped every minute! A quick prowl around the area and we found a photocopy shop and re-stocked. 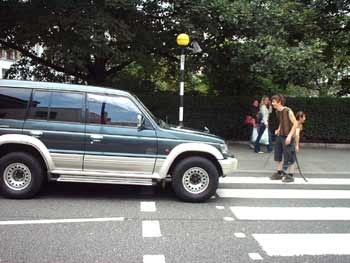 Shortly after this we honed our tactics with the help of another wild animal. Waiting by the side of the pavement we would stalk a 4x4 on it’s approach down the road. Then at the right moment we would stroll out onto a zebra crossing and the vehicle would be forced to stop. Before the driver knew what was going on a menagerie of wild cats would be snarling and pawing the windows whilst another would slip a leaflet into the wipers or through an open window. RAAAAA! 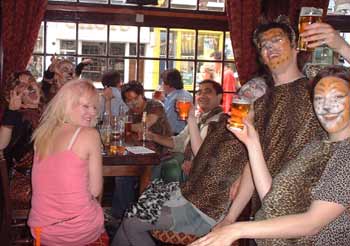 All of this exercise was thirsty work mind you, and so it was soon time to visit another watering hole. A couple of pints later and our hoarse roaring throats had recovered. Time to bag another few kills on the way home.

We eventually arrived back at Sloane Sq and waited to catch a bus back to Victoria. However as every wildlife programme shows big cats do not stand around waiting, so we laid down by the bus stop digesting our kills in the sun. Back at Victoria our hosts had put on a Lion party, and so with pizza and wine (typical leopard food) we talked away the evening and rested ready for another days hunting.