High Time, we though for another group of Londoners to be put through one of our experimental schemes. This time however we had an LWT film crew with us to add extra authority to our claim that it was an official scheme.

As part of thier Nightlife programme, LWT were filming "A Night With The Space Hijackers". They wanted to come out onto one of our missions with us and film what we got up to. Fine we said, as long as you join in and become a part of the plan. So along with setting up an experimantal pedestrian scheme in the heart of the city at rush hour, we also had an official TV crew pretending to be the news team, and questioning commuters on what they though of the proposed solution to pedestrian rage. 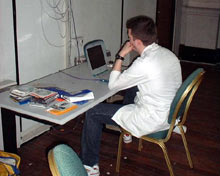 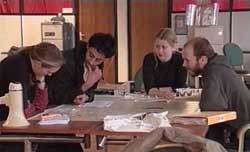 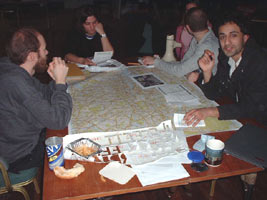 Agent Beagley hard at work & Planning the Action at HQ

The plan was as follows, a white line would be stuck down the center of the pavement dividing it into two. At either end a red road sign would be placed informing pedestrians to keep left, this would be re-enforced by our official shouting through his megaphen at people who veered out of their lane. The TV crew would be stopping pedestrians at random and giving little interviews on their thoughts on the scheme. People entering the scheme would also be given an A5 flyer explaining how to walk and giving information as to why the scheme was being trialed.

The crew filmed a series of interviews with us at the HQ, then took a look at our equipment supplies talked through by Special Agent Ricky, with his ever helpful assistant Anisha. After planning out where and how the mission was going to work, Eight hijacker agents and a TV crew left our HQ for the city. Several different roles had been assigned to the agents, four of us were going dressed as workmen in luminous overalls etc, three were dressed in casual clothes in order to give out flyers that we had prepared on the scheme, and another was dressed up as an official with a clipboard and megaphone. 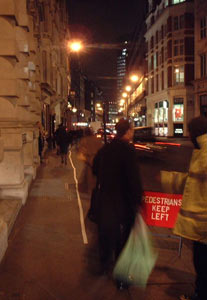 We arrived at Fenchurch St station at around 6pm, everyone got changed into their outfits and the workmen started to lay out the road signs and white line down the center of the pavement. Scarily, people immediately started walking in lane, and it looked as if there was no hope left for humanity. 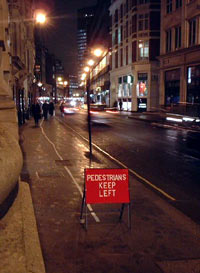 However, thankfully there were a few who point blank refused to walk on the left, even whilst our 'official' was screaming down his megaphone at them to change lane. Quite a number of people were looking quite put out or completely confused by the whole affair. Several people took time out to tell the TV crew that the scheme was an infringement on their rights and freedoms, although others (The more Nazi types amongst the cityboy ranks) were calling for the scheme's immediate installation everywhere.

Eventually it started to rain, and with a series of parties to be attended later in the evening, we had to call it a day. As I'm sure you can imagine much drinking was done, and many cheers to our new found celebrity status.

NIGHTLIFE (A night with the Space Hijackers) Screens Friday 15th Feb 2002, at midnight.