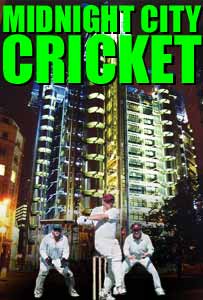 11/06/04
Our plan was simple, yet devious.
Meet up in a lively businessman pub dressed in our cricket whites,
drink all night and then at closing time challenge the City Boys to a midnight match in the city!

Capitalists Vs The Space Hijackers

The venue we chose was a pub called "The Counting House" just near the Bank Of England and in the heart of the financial Square Mile. A favourite drinking haunt of city boys and other utter bankers!

From 9pm onwards one Friday night our team began to infiltrate the pinstriped mass of the City on a weekday evening. Like some sort of virus we bagan to grow in numbers until there was an entire corner of the pub with about 20 cricketers clothed in white slowly getting more and more drunk in anticipation of the match ahead. 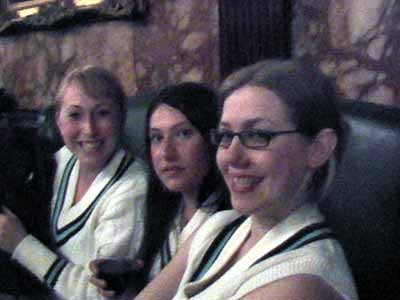 Naturally the City folk are a rather inquisative type, especially when their local is being overrun by odd looking folk, this was the reason for dressing in our whites and not suits. Once the level of drunkeness in the pub had raised to a suitable level we began to spread out amongst the curious pinstriped inhabitants and look for a suitable opposition. Unfortunately this was not to much avail. Many of the City Boys were facinated by our approach and idea of challenging them to a match, but most would not dare take the step to take us up on our challenge.

Time was knocking on by now and we were beginning to worry that we would have to play ourselves. Eventually last orders was called and agents Litost and Bristly decided to take the bull by the horns. Climbing half way up a set of stairs in order to give us a pulpit like view of the bar we noisly called the pub to order and officially challenged the Suits to a match to be held in the square around the corner. Almost immediately a group of seven Irish Business men and women took us up on the challenge! Next we had to find them the remainder of a team. 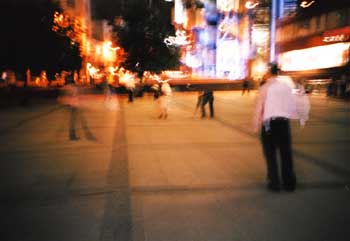 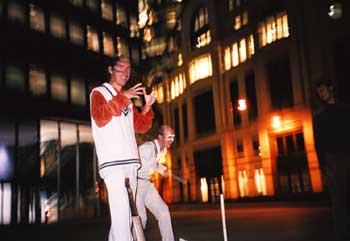 Heading out onto the street our cricketing ladies and gents went about stopping the stumbling businessmen on their way home and inviting them to join us for a match. Before long two teams were developing as we walked to the pitch (a paved square opposite the Lloyds building).

After a quick collection three Space Hijacker agents headed off to the nearest late night off licence to get supplies for the match ahead, whilst the rest of the teams set up the stumps and padded up. We decided on a few adaptions to the official MCC rules as explained by this handy diagram below: 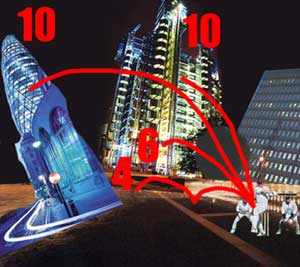 4 if you reach the boundary via the floor, 6 if it doesn't touch the floor and 10 if you hit the Llodys building or the Gherkin!

After a quick toss the Capitalists decided to bat first. None of us being natural cricketers, and all being a bit worse for the wear after 5 pints, the match was not quite up to test match standards, however the enjoyment was first class. The Capitalists put up a good defence and played an attacking game although this caused them to loose players quite frequently. Eventually declaring after a score of 30 for 5. (4 bowled and one caught). 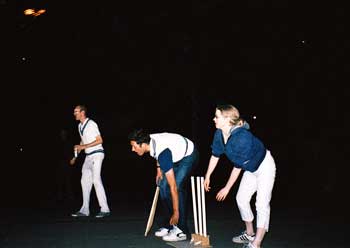 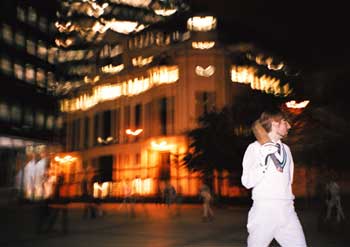 Luckily refreshments arrived at this moment and with bags of lager the game found a new lease of life. As some of the suits began to head off in order to catch their last trains back to suburbia, more arrived intreaged by the game in full swing in the heart of London's piggy bank. More and more drunken suits tagged onto our game with temps in stilleto heels feilding and bankers in brogues batting. 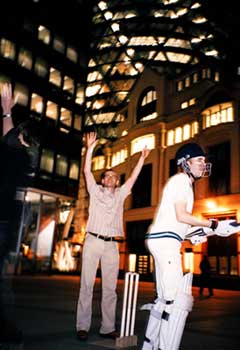 One of our favourites was a French business man who worked in the office facing the square we were playing in. He would be back at work on Monday morning having spent Friday night drinking, smoking and playing cricket with a ragtag bunch of troublemakers, protestors and oddballs! Somehow I doubut the front steps of the office will seem the same again.

Another gem was Nigel a computer programmer who was heading back to the office at one in the morning to catch up on some work. By three o'clock he was still bowling and drinking in the sqaure by his office front door! 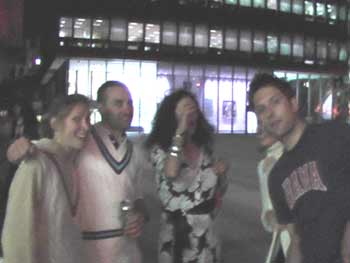 There was very little trouble from Police or Security, both of whom seemed more bemused than enraged by our match. At one point there was a Police car parked up across the road with two bemused officers staring confused at the procedings. I think it definately helped that for every Space Hijacker causing trouble we had a drunked suited office worker running around and joining in. 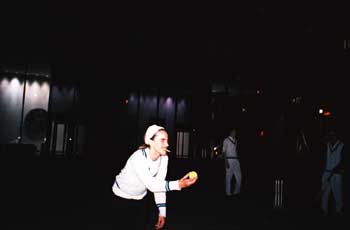 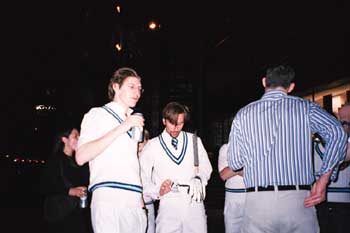 The match went on with the Space Hijackers team racking up a fair score, although by this time everyone had drunk far to much to tell how much we had actually scored. As the light was coming up we finished the match and the beer and headed back to our beds. Or at least some of us did, a hardcore partying contingent of the Space Hijackers team headed off still in their whites to party the night away.

A fine match and 1-0 to the Space Hijackers in this test series!