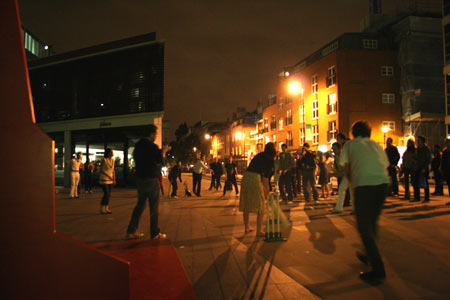 Midnight Cricket is a game where the Space Hijackers venture into the city, to host Anarchist Vs Capitalist cricket matches on the streets of the financial centre of London. After finding a suitable pub, full of bankers and hedge fund managers, we arrive en mass dressed in our cricket whites and drink with the suits, striking up conversation and then challenging them to a match at closing time.

The games force two opposing cultures to speak and argue out their stance. We also aim to transform the space we play in, in the mind of the participants, and ask the capitalists to start questioning authority and use of space when the police, undoubtedly turn up. 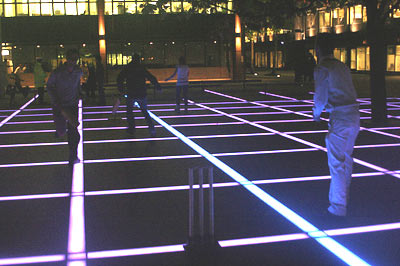 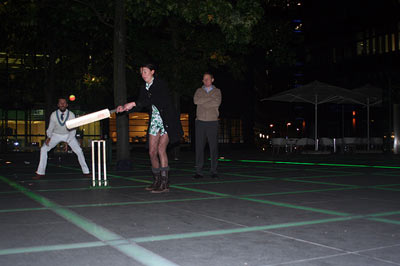 Previously we have played by Lloyds of London, opposite the bank of England and at St Pauls Cathedral. Looking for new turf this time we decided to try out the Broadgate centre by Liverpool Street. It's a private office development, which advertises itself as having 5 public squares. On of these squares has a night time tron style light show built into the floor and was right next to a pub full of suits.

Unfortunately for the capitalists, the pub closed bang on 11pm and the majority of the bankers ran back home to their suburban monotonoy, unable to escape the rat race cycle. However Agent V brought along the Beatrix sound system complete with Soul Limbo cricket theme, and after a quick sorting out of the teams, we set up the stumps and began to play with the other city workers we had goaded into playing. The star of the capitalist team, was a girl in a green dress, who eventually only fell after being caught out by one of her own team! I guess that's the cutthroat world of working in the city for you.

Soon the security turned up, and a guard called Dennis, asked us to move on. We explained that the centre was advertising itself as having public squares so we saw no reason to. He replied that they were public, but erm, private too. Eventually more and more security turned up, and it was clear that we were going to have to move on. So we informed them that at the end of the over we would pack up and go. To be honest we had also run out of drinks and were eager to find a busier square. So after bowling a few more balls and putting pay to the capitalists batsmen, we moved on. 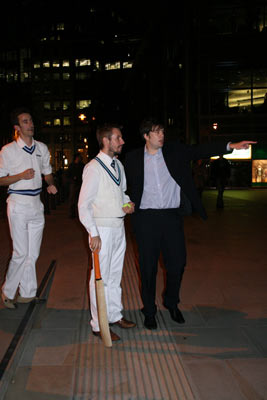 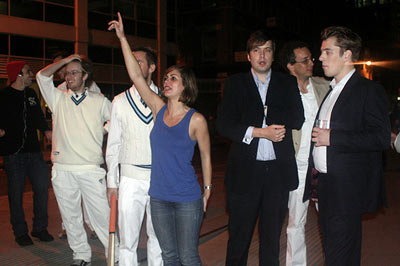 We moved to the Ten Bells on Commercial Street for a few drinks, and picked up a bigger team of capitalists to challenge. These ones were absolutely stereotypical city workers, with the bravado and swagger to match, it was going to be fun to watch them fall. After challenging them in the pub, we moved on to the site of the former Spitalfields Market, now another sprawling office development. Teams were picked, the sound system switched on and the game was on. 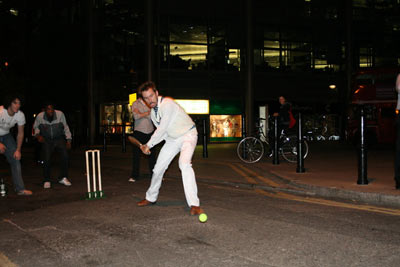 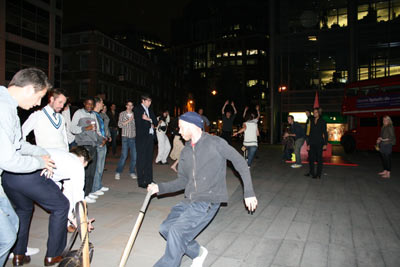 The capitalists took an early lead in the match racking up a high run rate. As you can imagine this did little to dampen there already over confident egos. 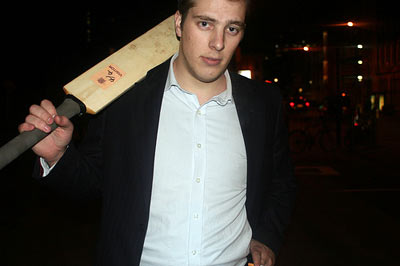 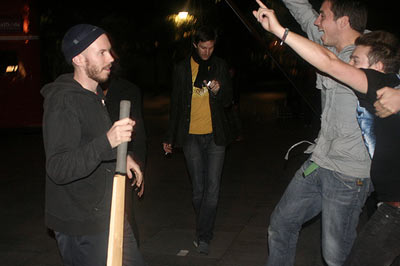 However the tables soon turned as the hijackers took to the crease and showed them how things are done. 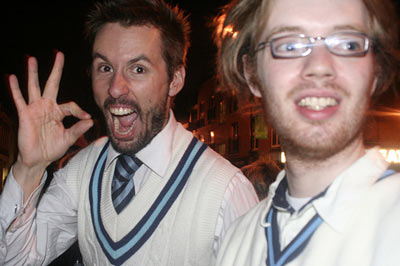 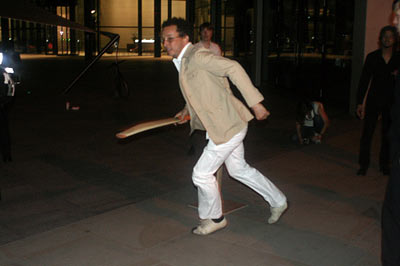 Agents Invisible Parsnip and Lady Bea kept track of score, however we were soon interrupted by another security team, claiming once again that the land was private and we must move on. The capitalists took a keen interest this time, and after discussing exactly where the corporation of London's land ended, we moved onto the road, 20 meters to the side! The Security team were more than happy with this ridiculous concession, and so the game continued. 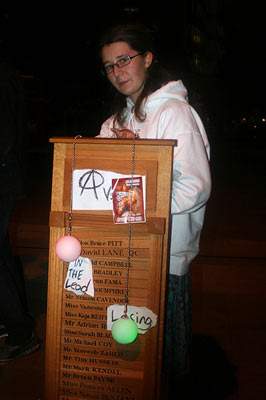 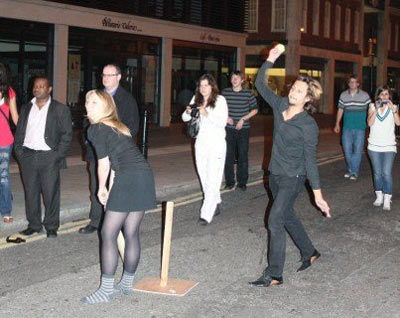 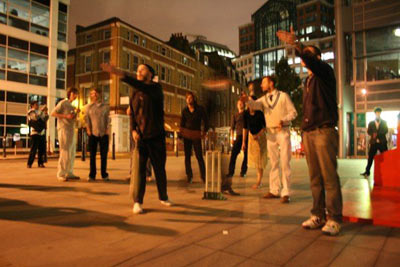 Soon enough however our fun was stopped again, this time by an extremely aggressive police team, who decided it was a wise idea to drive into the middle of our crowd and slam on the brakes skidding to a halt. They managed to miss the stumps and one of the city workers by about 12 inches in their mincy show of force. 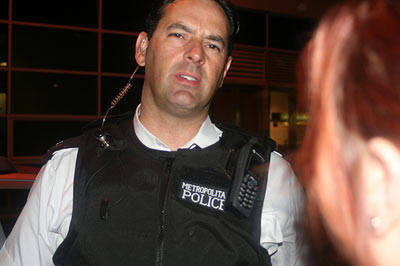 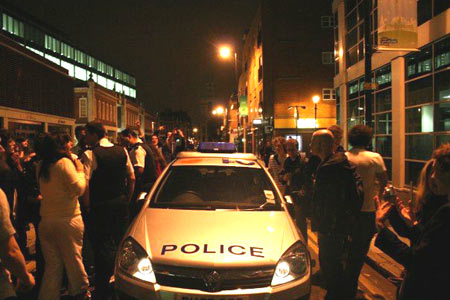 Jumping out of the car, they claimed to have had reports that we were carrying knives! They then proceeded to start making up laws, saying it was illegal for us to photograph or film them. They then grabbed one girls camera from her hands, breaking it in the result, and assaulted another female hijacker. Curiously at this point most of the Capitalists had fled. Their captain of their team claimed it was "more than my multi million pound contract's worth for me to get in trouble with the police" (this was of course utter rubbish). 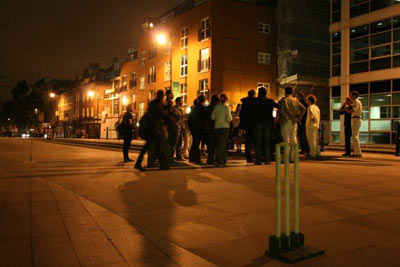 The police eventually had a good dressing down from everyone present, however it was clear that we were going to have to move on again, as they were refusing to move from being parked in the middle of our pitch. 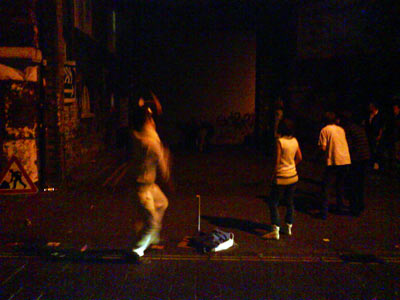 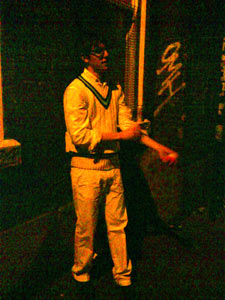 The game then moved onto the nearby brick lane, where it turned into an amazing match, with passers by joining in, and eventually us having to break out a real cricket ball as we had lost all of our tennis balls over walls and rooftops. 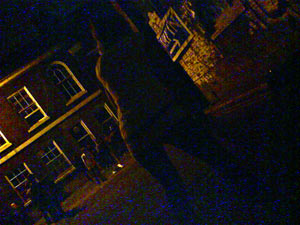 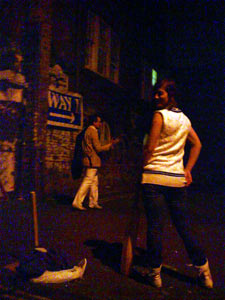 The night finally wound up at about 6am, after moving on with the sound system to another pub and eventually a local park where we had an outdoor party. The capitalist captain re-emerged at about 4am in the pub, looking very sheepish about his cowardly behavior, and toasted the hijackers.

Our unbeaten run continues... (mainly I think because we out drink and out party most of the opposition).

"My favourite moment was definitely when i was attacked by the policeman when i was trying to get Koshka's camera, and everyone around defended me so fiercely, like i've never been before. I'm not sure what was more intimidating, the policeman or all the people shouting at him. I didn't like to not be able to play more than 10 min, because i am such a bad cricket player..."
Gelatin Agent