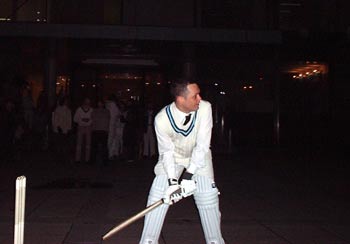 The third test match against the Capitalists of the City Of London took place on a cold Friday in January. The meeting place was the Pitcher & Piano, a pin stripe filled pub a stones throw from the Bank Of England.
The plan was to recruit a team of Bankers and Traders to represent Capitalism in a match against our anarchist sportsmen. A true clash of cultures and ideologies. Space Hijackers Vs The City Boys in a midnight cricket match, a match where we would challenge the business world to show us it’s gentlemanly character (is such a thing still existed in today’s world of global finance?). 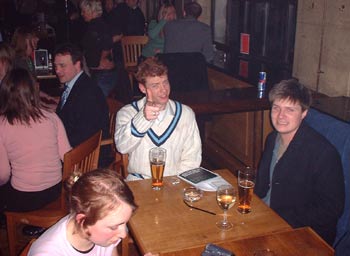 One by one, our cricketers arrived dressed in their whites, or best frocks. We set up camp at a large table near the door, and gradually our numbers swelled to a full team and reserves. Obviously a in pub where a pair of trainers would stand out from the suited masses, our party of cricketers (some in padding) stuck out like a sore thumb. Before long, we had a drink (well several really) for Dutch courage and began to size up the opposition.
A group of suited traders near the door, were our first and most vocal opponents, eager to take up our challenge. Meanwhile a group of City girls were paying special attention to our batsmen (agent Ricky especially), I don’t think this had much to do with the match though. 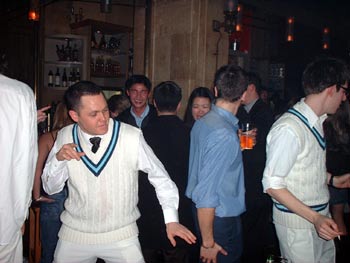 As the evening progressed our gallant ladies and gentlemen, took to the dance floor and struck up conversations with the opposition. However closing time was soon approaching and we only had half an opposing team! Desperate times called for desperate measures and so as the lights came up and the house music faded, agent Bristly Pioneer climbed up onto a table and addressed the pub.

“Ladies and Gentlemen of the City, we hereby challenge you to a midnight cricket match! Pinstripes against Cricket Whites! Space Hijackers Vs The City Boys! Anarchists Vs Capitalists!”
Never ones to back down from a challenge, a team of Suits was soon pulled together and as we were booted out from the pub, our two teams walked to the pitch. 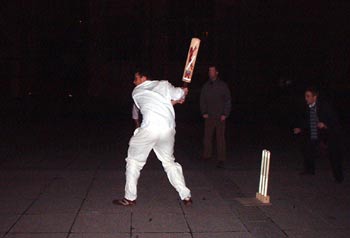 Opposite Lloyds of London, there is a big open concrete square, surrounded by stairs it creates a perfect urban cricket pitch. With an office block entrance stairs acting as a pavilion the stage was set for a clash of the titans.
The Capitalist Captain (acting in the name of Lady Thatcher) met agent Cupcake in the middle of the pitch to toss. Cupcake called heads and won, The Space Hijackers would be batting first!

Stumps were set up and the Capitalists arranged their fielders, whilst Agents Cupcake & Swindells padded up and took to the crease. It was at this time that we realised the might of the opposition, with several members claiming to have had county experience. Our first few batsmen were bowled out in rapid succession, barely racking up a dozen runs, however as the whisky was broken out, and our bellies were warmed we dug our heels in and soon set the batting average back to respectable levels. 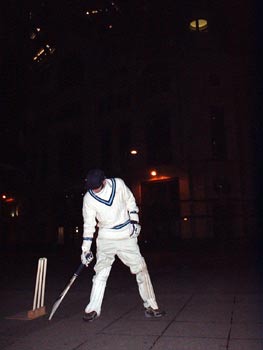 The Capitalists were keen and aggressive bowlers and fielders dedicating overs to Enron, Bush, Dennis Thatcher and other hooligans. However unlike previous Capitalist teams we have played they mainly stuck to the rules. The only diversion being a sneaky tactic of changing the colour of the ball bowled several times in one over!

Our team declared about an hour into the match having racked up a tidy sum of runs whilst both teams retired to the pavilion for cucumber sandwiches, whisky & vodka! The supporters were in fine voice and generous clapping had buoyed spirits during the cold night. 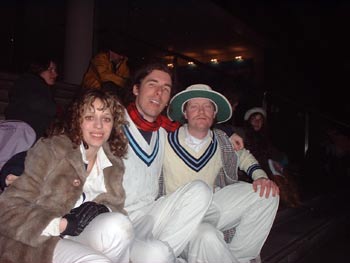 After a quick arrangement of batting order the Space Hijackers took to the field and our first two City boys took up their bats. The level of bowling from the Space Hijacker team was remarkable, especially considering the blood/alcohol levels at this point, Agents Taylor and Greenman (wearing his south African tie) soon had their first scalps. There was a beautiful catch by Agent Bristly Pioneer, and soon we were looking at the ruins of Global Capitalism. Some late night team extras joined the Capitalist team, after having finished at the pub. One of whom worked for the company responsible for our impending ID cards.

With grit, determination and focus however the night was soon ours! A victory for troublemakers everywhere. With a gentlemanly shake of hands and a round of applause from the pavilion, the two teams parted at about 2am. The Capitalists were much more gentlemanly than we had previously experienced, however at the end of the night, it was the gleaming whites of the Anarchist team that shone through and claimed the title.