Ouch, 7:30 am. Myself and special agent Ed set off from our Bow HQ with sleepy heads and bleary eyes. We arrived at Liverpool St station to a mixture of sights. On the one hand hundreds of cyclists were already making a nusance of themselves blocking the entire area around Liverpool St, on the other, the Police were piling in and bundling a bloke to the floor who had the audacity to wear a balaclava. We immediately bumped into two members of brother trouble makers Molotov, who were looking to see the police were behaving when treating our shy friend in the balaclava.

Once a fair amount of stragglers had turned up the critical mass began on its way, accompanied by around 30 police motorbikes and countless other fume chugging vans and cars, the police obviously missing the point of the whole event. 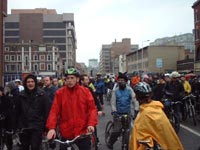 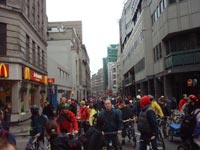 The ride set about the city, although constantly under the all seeing eye of the Police. We soon bumped into Agent Arthur from Montreal and our posse grew. Everything was perfectly respectable until we reached Bank, where upon a lot of us decided that riding bikes was fun, but standing still in the middle of major junctions was a lot more fun. Within minutes a whole new face of the police appeared and these ones were dressed for trouble. We were all asked to move along, to which we all decided to do nothing of the sort. Excuses like "I'm smoking a fag" were amongst those given. 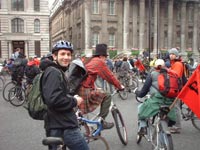 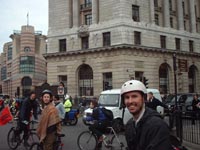 Eventually after a bit of jostling from the boys in blue we got back on track only to stop again at the next junction. The police by this point obviously decided that they had had enough of the protest for the day, it being 9am already. So they set upn the cyclists running in in packs and arresting people for things such as wearing pollution masks. Groups of police would single someone out for any random reason, pile in, shoving people out of the way and grabbing unsuspecting cyclists, who would be pulled off their bikes and dragged to the side of the road then bundled into the nearest building. 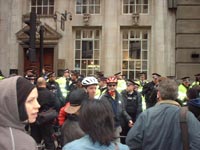 The lad who had been smoking at Bank was singled out for no apparent reason at all, shortly before a guy next to me who had his cycle mask ripped off his face by 5 ugly hyped up policemen. Obviosly the law doesn't count when you are dealing with our type of scum. Once again the police did their bit to make the day go by without any trouble, and after much intimidation and a stand off the protestors took control of the situation and carried on.

BACK TO PROJECTS - NEXT