Mayday has for centuries been a day of turning the social rules and structures upside down, a day for having a party in the streets, and a day for ridiculing those who rule you. Since the time of the Haymarket Martyrs it has also been linked to social and political struggles.

We wanted to enliven the protests in London which have been bogged down and suppressed in recent years by a paranoid and often overly aggressive police force. This has caused many activists to shy away from mayday demonstrations, forcing autonomous groups to re-join the state authorised Trade Union march as opposed to organising their own events. It was with this in mind that we organised a corporate brainstorming session at Reclaim The Future (an activist party and fundraising event). Out of that meeting our idea for Mayday was born.

We planned to hold a streetparty in Canary Wharf in London, to protest against the corporate culture which runs our lives, ruins our planet and condems us to a life of dull uninspired boredom. To get around the Police tactics of deterring people from the area and surrounding the protestors we encouraged everyone to dress up in corporate attire so as to slip under their radar. 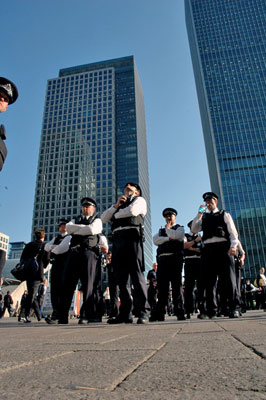 Apparently 500 police had been brought in to put pay to this, and shut things down as soon as they could. They had done their research and quickly identified many of the Space Hijackers before the event kicked off. Surrounding our table at a nearby bar and searching many of us. Agents Bristly Pioneer and Greenman were informed that they would have two policemen each to follow them for the rest of the day (we consider it tax back). However after some calm negotiating the Police decided to let the event go ahead as planned and monitor the situation as it went on. 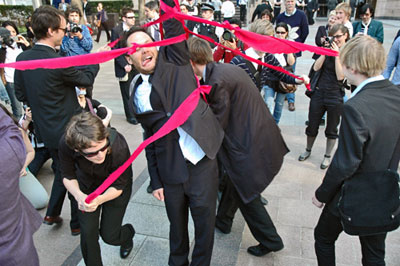 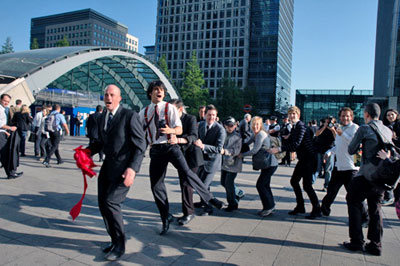 Around 200 people came along to dance in the streets and celebrate Mayday with the Hijackers, many of whom came from the march earlier in the day and switched into suits en route to Canary Wharf. We unzipped a suitcase with a sound system hidden in it and everyone started dancing, to our mayday playlist. A Police photographer started harassing and documenting everyones faces, therefore it was decided that he would be the May King. No sooner had this been announced than a crowd of about twenty adoring fans started following and cheering his every move. 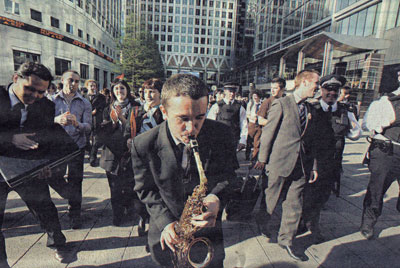 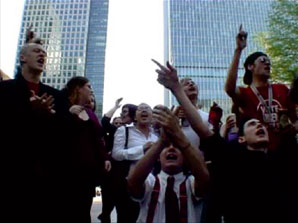 Unfortunately our sound system was quickly shut down by the police and canary wharf security. The entire area being private land there were a lot of legal powers in the police's belt. However as always undeterred, we simply brought out our song sheets and carried on the party. Soon after our agents started to break out the instruments and we were dancing to saxophones, violins and a samba band! The police attempted at one point to surround the crowd, however in an amazingly cunning move, we simply started a conga, and danced right out of the police cordon! 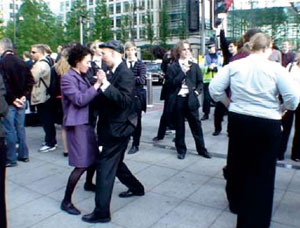 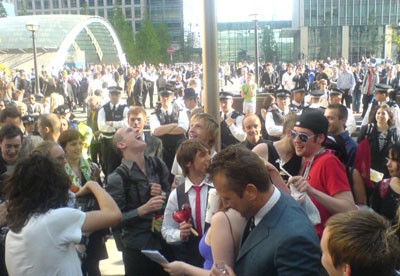 The crowd grew and grew until we were beginning to fill the square. The police at this point got their knickers in a right twist and arrested one of our agents for being a known protestor and not playing their game as they would like. The arrest itself was completely over the top and violent, with them grabbing him by the throat and being generally abusive. We can only assume it was done as a show of force to the ever growing crowd.

A decision was made to head on down to a nearby beach (public land and ruled over by the river police not the city police) where we could put our sound system back on and continue the party. Our Police escort switched to the more agressive City Police who did their very best to antagonise and disrupt the proceedings. They grabbed another two of our crowd on route to the beach in another macho show of force (punching and kicking people in the process), then pulled out truncheons and attempted to surround our group. Rather than getting into a pitched battle, which we thought would have done little more than injure more people and pander to the aspirations of the police who massively outnumbered us, we decided to continue on. 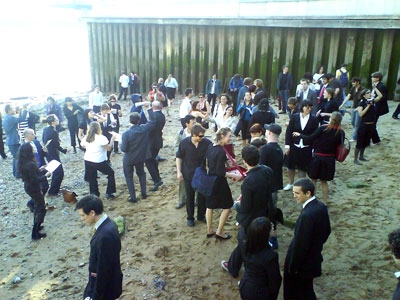 We eventually made it safely to the sand, the sound system was put back on and we danced the funky chicken. People swam in the thames, made sand castles and sang songs. My favourite being "We all live in a terrorist regime" sung to the tune of Yellow Submarine! 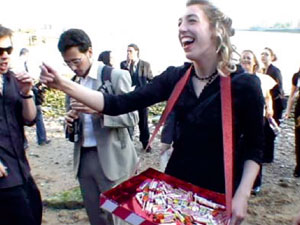 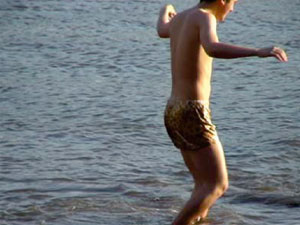 Eventually the sun went down and we all headed off to the nearby Ramparts centre to dance the night away... 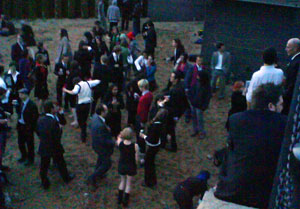 My highlights of the day:

Agent Cora - 5 months old and at her first May Day.
The sound system being shut down and everyone bursting in to 'Holiday' by Madonna.
Undecided and Shaz in the Thames - did their toes fall off?
Pelf and the lone maracas.
Danger Joel rescuing my sister and her mate and getting into a scuffle with local youfs.
The Samba Band at Ramparts - amazing every time.
Me getting home in one piece.
Til next year...

The beach party was intrinsically funny just because of the setup: a police boat adrift, lots of suits and anarchists raving it up on the beach, surrounded by more police and bemused bystanders...

The police photographer at Canary Wharf really didn't like it when he was crowned May King, and suddenly all the people he'd been taking photos of rushed towards him cheering him on. I've never seen a policeman so perplexed, it was marvellous.
Cpt. Pants!

During this, I had one of the best moments of my day, standing in a bar dressed as a yuppie, pretending to be an appalled Yuppie to another protestor dressed as a Yuppie.
"Why are all the police here? This isn't normal..."
"Apparently there's going to be some sort of protest or something..."
"Oh. Well, so long as they don't molotov me, I don't mind."