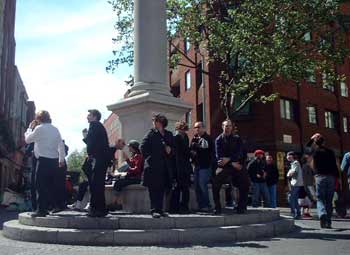 After meeting again at Holborn we walked along to the protest outside Lockheed Martin and were pleased to see the boarded up doors and windows. However there was no disco spot in the vacinity so we walked around the corner to 7 dials. With our police escort still on tow we set up our sound system again on the round-about in the centre and kicked off with "Dancing In The Streets", an inspired DJ choice.

Whilst we were dancing the Green/Anarchist march passed by the end of the road, eager to ad a bit of diversity to the dress code our suited band of dancers headed off to meet them. We danced with the Samba band around until we circled back to Holborn, at which point the Police decided the fun must stop again and began to coral people in.

SMART DRESS WORKS - Us being honest city folk made a break for the side lines and past the Police as this began to happen, thereby making a hole for the rest of the march to follow through. Before we knew it we were leading a hundreds of protestors down a side street and back onto another main road away from the Police! The Police began to catch up again and so we simply stepped to one side and let the march pass us by, the Police didn't blink as they walked past us and left us to our own devices.

The next thing we knew we were being interviewed by an eagle eyed radio reporter who mistook us for genuine business men and women. We informed her that we had all either bunked off the afternoon or just quit our jobs in support of the protests. Explaining that the media hype about violence and destruction was obviously not true, and that after having read the literature of some of the groups themselves we had seen the error of our ways and quit!

Time for another disco. We headed back to Tottenham Ct Rd to meet up with agent Evol for his tROUSErless DEMONStration. Three riot vans we waiting for the demo to take place, although they did not know what to look for. We headed up Tottenham Ct Rd to set up another disco and meet Evol and his trouserless band as they passed us. Unfortunately shortly after setting up, the riot vans took an interest in our dance moves and came over to move us on. "You don't have an entertainment licence Sonny Jim", "But we are only entertaining ourselves officer" "Clear Off!". Time for a new venue. 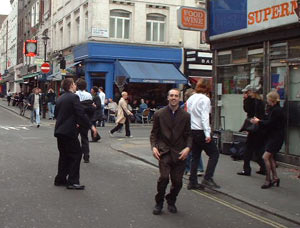 Old Compton St - The hub of London's gay community and a semi-pedestrianised area, surely our disco must be welcome there, and it was. Almost as soon as the sound system was switched on, we had people joining in to dance with us. Shop keepers came out of their shops, girls and boys put down their bags and a street party was started! One girl pulled a football out of her bag and a game of keepie-up was started with shop keepers, dancers, bin men and passersby all joining in. Everyone was happy, people had stopped in the street to dance or just watch, and for a long time there was no Police presence!

Then they came, one car, one van, and about fifteen Policemen and women (over reaction?) came to close down our party.

"You are disrupting the local businesses"
"Erm, they are dancing with us"

The logic of the Police never ceases to amaze me. Eventually we decided to leave before they stole our stereo. So it was off to the pub for refreshments.

Several pints later, and after recruiting more dancers, it was decided it was time for another disco!

The venue this time was just near Leicester Sq, and there was more of a breakdance and rock theme to this one. It was by far the most successful of the day, and lasted until dark with NO Police! The breakdancing mat was brought out and a street dancing contest was started. Loads of people joined in with our disco. Japanese tourists, Hip Hop boys, Critical Mass cyclists, Foreign exchange school kids and a host of others.

Greenman & Bristly Pioneer kept the croud entertained with their breakdancing skills, whilst DJ Ricky kept the fine tunes playing. Eventually some real breakdancers showed up to teach us how it should be done, and the crowd grew and grew! 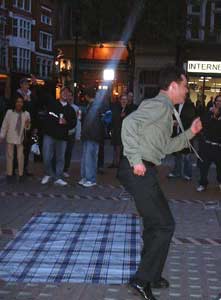 Thankyou so much to everyone who dressed up and came and danced with us, we will be appearing in a street near you soon.

For another report and more pics click here - bloggerheads.com