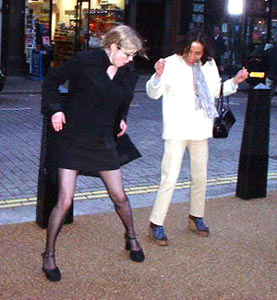 The plan was simple, use our mobile sound system smuggled past the watching eyes of the authorities at the end of the circle line party and take to the streets on Mayday. Dressed in our smartest business wear, we headed into the city to bring a bit of disco fever to the Mayday celebrations. The meeting point was at midday at Bank opposite the Bank of England, and heart of the capitalist machine. Suitably attired we pulled our matching luggage cases (Containing the amplifiers) and walked onto a regular business lunchtime scene. People were milling around in the sunshine and nibbling on sandwiches. The cases were opened up and DJ Ricky connected up our CD player. Kylie's beats started pumping out to the lunchtime crowd and instantly half of the assembled suits jumped into disco action! Passers by and people in the surrounding offices were asked to bunk off after lunch and join our touring disco. Unfortunately this hub of fun in the centre of the city immediately attracted the attention of the Police, and we were surrounded by around a dozen of her majesties finest to protect us from the anarchist masses. 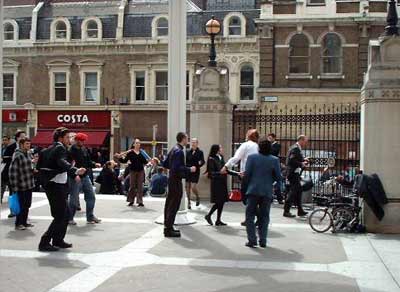 We shortly moved on to Liverpool St with our Police escort following, and set up camp again just outside of McDonalds. More disco anthems were set free upon the commuting masses and we attracted quite a crowd. Along with this unfortunately also came more police, bringing our number of boys in blue up to around 16. They formed a neat little circle around us and preceded to take notes on everything that happened. - Male DJ in brown suit, appears to have bad taste in music.
- Male in blue pinstripes, asking people to dance with him, could be dangerous.
- Female in smart skirt, doing the samba with others, approach with caution.

Eventually the fun was stopped by British Rail, who told us that our disco was disrupting the business of the nearby McDonalds (poor things) and that we would have to go. However it also seemed that we were not allowed to go by the Police. As we left to meet again at Holborn, one of our suited gang was stopped and questioned under the prevention of terrorism act and the rest of us were given a Police escort on the tube!