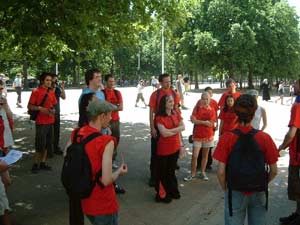 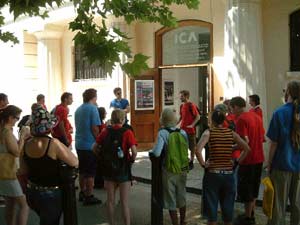 Meeting up at 1pm outside the ICA in London, our intrepid band of adventurers were getting ready to set off on a Sight-seeing tour with a difference. We had two main rules that conducted how we would go about the exclusive area of St James in London:

1 - You must avoid touching the floor at all times.
2 - If you do have to touch the floor (to cross roads etc) you must hold you breath.

These two simple rules would be strictly followed, even to the point where later on in the tour a riot van turned up and we could only speak to the Police officers whilst off the floor!

Around 25 adventurers had turned up for our tour, and we all dressed up in official red tour t-shirts, so as to resemble a foreign school tourist group.
We walked around the corner of the building and up to a large set of steps that ran up to the road behind the ICA. It was decided that steps themselves didn't count as floor, but the small landings inbetween flights of staris did. Agent Robin was leading the tour and as soon as we set foot on the steps the rules would come into effect. The first hurdle was a landing with a hand rail running alongside it, this was eventually overcome (after several methods were tried and failed) by hanging upside down on the rail and climbing across commando style. 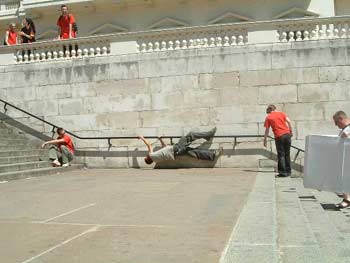 At top of the stairs we clibed up a short wall and onto the roof of the ICA, ever dubious of large institutions we would put them to the test and use their building as the first that we would climb on. The ICA (Institute of Contemporary Art) had asked us to come up with a project to go in their 'Radical Entertainment' season, and so climbing on their roof was decided upon. All 25 of us made it up onto the roof, and proceeded around to the front of the building and along the roof towards admiralty arch. At the end of the building there was a drop down to a set of benches and flowerbeds. Luckily we had come prepared with a rope ladder which was attached to the rooftop and dropped down. Some of the more adventurous among our group however decided to hand off the side and drop to the flowerbeds!