From 13th - 16th November 2003, The Space Hijackers travelled to Paris for a number of conferences, lectures, drinking sessions, breakdance competitions and trouble causing actions. Invited to speak in the European Social Forum (an international meet up of lefties, environmentalists, troublemakers and NGO's) we also arranged an International Space Hijackers Conference and spoke at Borderphonics (a computer nerd web radio / disco / workshop).

Arriving in Paris via a number of methods, (the stupidest of us travelling by coach), we met up at the youth hostel that we had booked. The plan was to check out the ESF and the night time entertainment before the first of our talks on the Friday evening. The ESF was hosted in 4 areas of Paris, Saint Denis, Bobigny, Ivry-sur-seine, and Central Paris. We had been told that a load of people were due to be meeting up in Saint Denis later that evening, so we dropped off our bags, jumped on the metro and headed north. Arriving at Saint Denis we began to search around for the ESF centres following orange arrows that had been put up all over town. We registered and then began a wild goose chase of walking from translation centre to lecture hall, to youth club etc, but never actually finding the people we were looking for. This became a bit of a theme for the weekend, due to the fact that none of the four ESF centres had an information centre where you could find out what was going on, instead you had to rely on a newspaper with a timetable and maps.

Never ones to be disheartend we made our own entertainment, stopping off for some grub and a drink before heading back to the hostel for some cheap vin rouge. 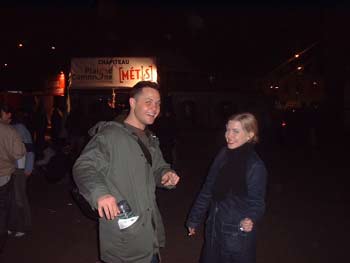 Waking up at 8:00 in the morning we left our hostel in order to catch Ken Loach speaking in a forum called 'For A New Cinema", but unfortunately due to the bad directions and general disorganisation of the ESF we didn't arrive at the talk until after it had started, so we were not let in. Instead we got to check out the very strange modernist architecture of the conference hall that it was set in. 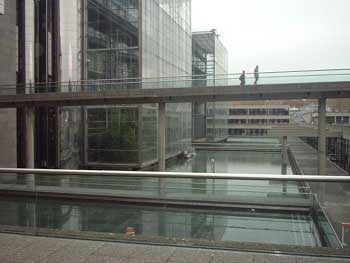 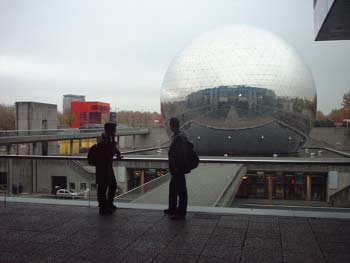 Around the conference were a number of stalls from lefty groups such as the SWP, CND, and other European versions of such groups. After refusing to buy numerous papers, badges, flags and t-shirts, we began to tire of the earnest organised and heirarchical lefty cause, and long for excitement in Gay Paris! Afterall we had come to the city of the Situationist International, of the 1968 riots, of leftbank drinking and revolution! Balls to the routines and organisational troubles of the ESF, we headed off into Paris!

Our after drinking some strong coffee we met up with John Wild (English troublemaker and SH agent) who had a plan for some fun on the Champs Elysee. 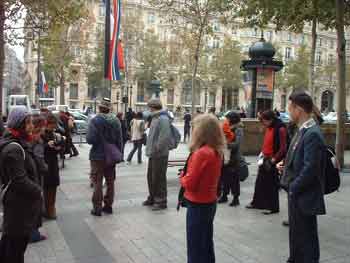 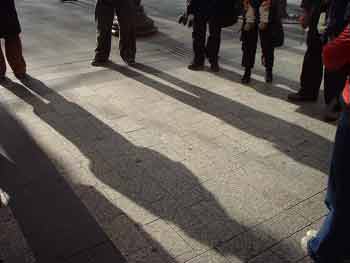 The plan was to form a ring of people protecting a moving circle space through the crowds of shopping on Paris' main shopping street. John had done his homework and managed to gather a crowd of about 16 people from England and Spain. Forming a circle we started to make our way down the street, protecting an invisible space, as if it was the most precious thing in the world. Some of the Spanish contingent took this quite far even blocking people crossing the main road so that they could not enter our circle.

This turned out to be great fun, with many confused shoppers following our group and staring at a blank space on the floor to try and see the invisible animal that we were protecting as it travelled down Paris' busiest street. The effect was to create a moving empty circle of space through the consumer crowds of Friday afternoon.

After this we decided it was high time for a drink (after all why else do you come to Paris?) and almost time for our International Conference.