We have always ones to treat authorities with the respect they deserve, especially the un-elected ones. when we heard that George Bush was coming to town we decided it was high time that someone arrested the God Darned Cotton Pickin' Red neck outlaw! Responisible for more harm to humanity and the environment than you can shake a stick at. The worlds No.1 bandit, was not going to get a warm welcome in our town, infact if we had our way he would be locked up with the other criminals in the Sheriffs office by sundown! 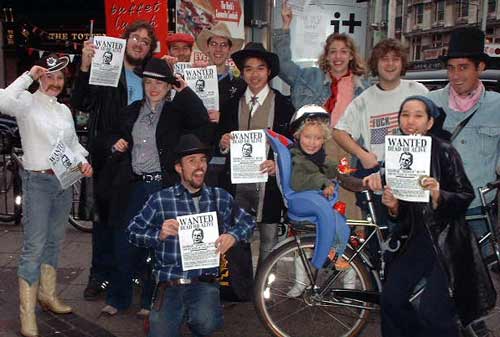 A posse of cowboys and girls met up to post up our wanted posters all over town, just incase anyone caught sight of the outlaw and his band of gunmen. Heading up Tottenham Court road we made sure everyone was aware that a dangerous criminal was in the area. Arriving at Senate House we discovered that one of Dubya's henchmen was due to be arriving soon. International bandit Colin Powell (Responsible for lying to the UN about Saddams Weapons Of Mass Destruction) was due to be speaking soon. There were already protests afoot, and the limey police had blocked the front doors to the building.

Our band of Lawmen rode on up to the Police and informed them that we would take charge of the situation, and that they were all relieved from duty, curiously they didn't seem to respect our authority, and when we tried to gain entry to the building they were positively unhelpful! We tried a side door and managed to slip past the security only to be jumped upon by three more further down the corridoor. After a few more unsuccesful attempts to get in and set a trap to arrest the outlaw we decided to head after Dubya himself.

Moseying back on down to Charing Cross Rd we met up with another cowgirl and decided it was time to inform a greater audience of the dangers of the outlaw we were hunting down. Strolling into a number of bars we would fire our guns into the air, shout Yeee HAAAA! and show our wanted posters to the mid-afternoon drinkers. Generally getting a couple of rousing Yeee Haaa's back from the good public.

We had word that the criminal we were a huntin' was holed up in a building at the end of the Mall, by none other than that Limey Queen Elizabeth! Gawd Darn, we had better head on over there and see if we could catch him! 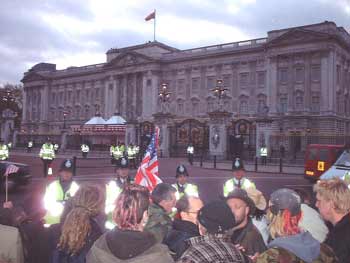 Strollin on down the mall we reached Buckingham Palace to the sight of hundreds of limey police. Obviously they were about to set a trap to catch the good for nothing outlaw. We went up to the police lines and showed them our wanted posters so that they would know what he looked like if they caught sight of the slippery vermin. The number of protestors were growing, and shouting about the evils of the bandit that we had been chasing.

When suddenly the group of Police next to us burst through the metal cordons surrounding the Palace and dashed straight for our group of sheriffs! Grabbing sheriff Bristly and sheriff Ladybird they frisked the pair of officers of the law after having seen us holding our police issue guns!

As you can see they are dangerous weapons in the wrong hands, and fire a mean cardboard bullet to pacify any troublesome bandit! Slightly confused by the officers reaction to our standard issue weapons we never the less decided to let the limey officers off with the excuse that they must have just had shakey nerves, due to the fact they were about to aprehend Texas' biggest criminal. 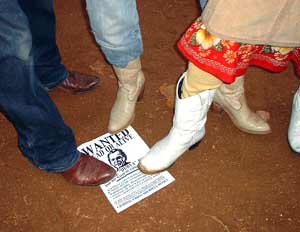 Off to our right the Police started moving about hastily, and then suddenly over the horizon came a motorcade of vehicles carrying the very guy we were after. He was heading right into the trap!

But I'll be damned! those useless Policemen were looking out at us and the protestors just at the moment the motorcade arrived! We were hollering for them to turn around and catch the bandits in the motorcade, but they must have mistaken our orders. Perhaps they couldn't hear us due to all the Booo's from the protestors, as they continued to look at us. That evil Dubya slipped right behind their backs and into the Palace stronghold where he had been hiding before! 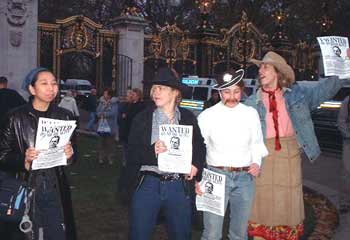 NEVER TRUST A LIMEY POLICEMAN TO CATCH A TEXAN OUTLAW!

It seemed these good for nothin' police must have been on the payroll of that double crossin' Dubya all along. DAMN! Time for us to fetch us some firewater! 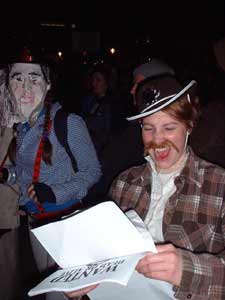 We returned back to central London the next day as we heard there was going to be a lynch mob gatherin' to get the slippery toad! Splitting up to start off with we walked amongst the 200'000 strong mob to hand out wanted posters so that people would know who to get. 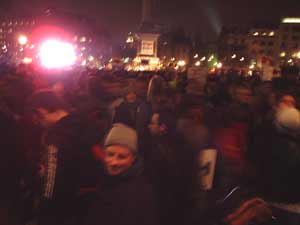 Eventually we met up in Trafalgar square to plan our campaign, but due to the thousands of people, good spirit and music, we ended up doing more square dancing than criminal catching. Finally ending up drunk in a bar near Leicester Sq! It turned out the outlaw fled the country the next day, probably due to the size of the lynch mob looking for him.

Mark my words, son, if that good fur nuthin' rootin' tootin' red neck hoodlum and his posse come back into town, theyrse gonna be trouble!