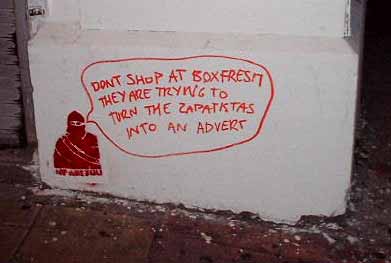 You may have seen the Zapatista graf up around central London, what you maybe didn't know was that it was a dirty ad campaign by Boxfresh a trendy Covent Garden clothes store. In an attempt to flog some more merchandise Boxfresh decided to try and fuse their brand logo with the Zapatista struggle. We think they are a bunch of nasties.

So we launched a campaign against them and their ad's, through the Internet, by graffiti and finally by dressing up in true Zapatista style and flyering customers to their store. Eventually Boxfresh decided enough was enough and the Head of Marketing, the Advert Designer and the Owner of the Company came down for a meeting. They tried to tell us they weren't a bunch of nasties and then agreed to the following:

1 - They would from this moment on donate every penny of profit from there Zapatista merchandise to the Zapatistas themselves.

2 - They would install a computer in the shop with a range of Zapatista sites on it.

3 - They would no longer put their logo on the adverts with Sub Comandante Marcos's words on them.

4 - They would have a leaflet in the store explaining the history of the Zapatista's and in all further marketing attempt to spread information about the Zapatista cause and their ethics as opposed to simply using them in soundbites and as an aesthetic.

In the words of the owner of Boxfresh himself "You caught us with our pants down, and we realise we were wrong". We realise that this is not an ideal solution and would obviously prefer the complete withdrawl of all of the Zapatista stuff, however we were at the same time bloody suprised to have even got this far.