The Space Hijackers were invited by the Lux Centre to take part in their DVolution programme that was to be run as a series of events. The night we were asked to contribute to was called "Club Culture Jam, scratching the surface of corporate culture". We had been asked to work alongside "Animal Charm" a Chicago based pair of video jockeys who remix and distort corporate videos to a live soundtrack. 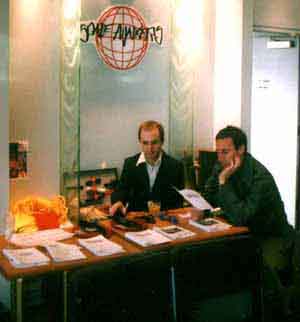 We were given the foyer of the Lux to use as we wished and decided to convert it into a Hijackers temporary HQ, giving out information on our projects and manifesto's. We filled the Lux's cinema boards with our own posters and set up a stand in the foyer. To complete the Corporate remix and makeover theme we brought along a selection of our equipment and brochures on how to convert your very own briefcase into a Hijacker tool.

Visitors could also apply to become one of our Undercover Agents as a team of Hijackers was on hand to asses applicants. The Lux Centre applicants were put through a questionnaire and a series of tests to see if they were of the right caliber. These test included a quick change in and out of a diguise costume, and a preliminary test of nerves and skill. Successful applicants would then later be notified by email and given the password to the top secret part of the website.

Along with the event itself we were also involved in the advertising for the night. In true Hijacker fashion this could not simply take the form of flyers and posters on walls, we decided to go a little further. Raids on East London were done in the middle of the night with teams of two or three hijackers working at a time. First of all we hit the major galleries, universities, coffee bars, pubs, shops and clubs with a series of graffiti. We chalked messages on walls, floors, roads and anywhere else that would take it. We then moved onto stage two where we stamped fly-posters with our custom made stamp. Finally stage three was a series of A1 posters that we taped to the roofs of bus stops in the area.

In total around 30 agents were taken on that evening and have been granted admission to our Top Secret Website. Our appologies go out to anyone who didn't cut the mustard.

I WANT TO APPLY!