Sometimes the simplest ideas are the best. One of us came up with an idea to start decorating the roofs of bus shelters, as everyone sees them and they are also out of sight to the authorities.

We didn't want it too look like advertising, so there is no SH logo, we just wanted to make an odd story out of the bus stop. 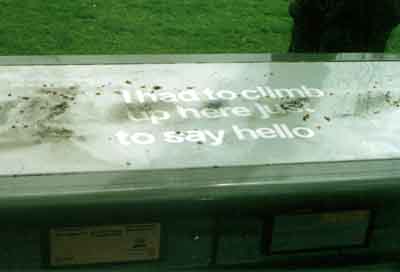 Three of us went to the stop just after 1am when the traffic on the road had reduced to a trickle. Whilst two people looked out either way for Police or buses, the third scaled the roof and began to wash the dirt off. It is worth noting just how many police cars drive past this stop in the middle of the night; it seemed more like an army workout than a stealth mission. I had to jump down from and climb back onto the roof of the stop around 20 times during the installation.

After having washed the roof we stuck up the letters that we had had made in a sign shop near Old Street. The letters are self-adhesive vinyl lettering that is both waterproof and hard wearing, perfect for bus stops plastic roofs. All went well in the installation except for one point when an ambulance pulled up next to the stop for a break and we all had to scarper across the field behind.

The sign remains there to this day and is visible from the left hand side of any westbound 25 or 253 bus.

The stop on Whitechapel High street was chosen for several reasons:

1There are no buildings behind it so the only audience are the people on top deck.

2 It is a frequent stop for the bus.

3 It has several escape routes for installing the piece.

3It is on the way into town, so people wil

l mainly see it in daylight.

Other stops with a similar nature also exist and we hope to put signs onto these too.